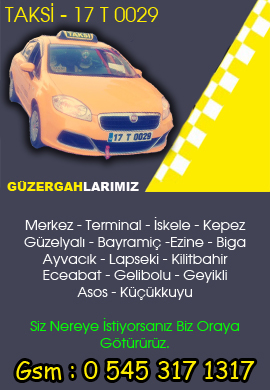 Barren soil fertility god called İmbrasos Imroz known as the land of abundance, Gökçeada its present name; In Homer's Iliad peridot the sea god's referred to as the island

The island is the oldest resident of BC Plasglar are bilinmektedir.miltiades 500 Island connected to Atna. Until under Roman rule. He was ruled Athens. 1455 'was part of the Ottoman Empire territory. 471 years of Ottoman rule Gökçedam remaining in the Turkish and Greek citizens have lived in peace in their religion, their customs and traditions of unlimited use.

Sultan Suleiman period was transformed into the foundation. 1862-1903't to Algeria Bahrisefit province of Limnos Sanchez connected idi.1908-1912 Limnos Detached Mutassarrıflıg the bağlandı.balk defeat as a result of the island Greece sovereignty of the past, during the First World War (in 1914) was used as a naval and air base by the British. 1922-1923 'also had the Greek occupation. Gokceada July 24 1923 Lausanne Treaty is passed into the hands of the Turks. September 22, 1923, the actual receipt of the island. This date is celebrated as the day of liberation of the island